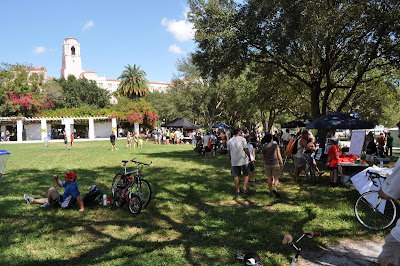 I didn't get around the Bicycle Bash by the Bay festival as much as I had hoped on Sunday, so it was only after looking at photographs taken by other folks did I realize how truly diverse the bicyclists were who attended the BBbtB.

It's one of the things I'm proud about, regarding the Bicycle Bash by the Bay. That it's a true cross-section of roadies, mountain bikers, cruisers, fixed-gears, recumbents, trikes and even tall bikes with ages ranging from 1-90.

SWFBUD is proud to hold the Bicycle Bash by the Bay every year. And besides the photos I took that are available on the previous post, I wanted to share with you highlights of other photo displays taken by other folks.

Bridget took a boatload of photos, and I tried the best I could to pick the best of the best of her photos when I posted them on my Bicycle Stories blog. Here was my favorite of Bridget's photos. 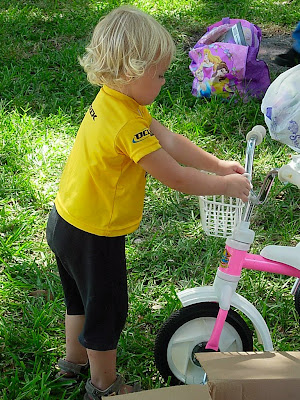 Then, there's Jack Sweeney, the famed Ghost Rider, who posted a terrific series of photos on his bikecommuters.com Web site.

And Ken Sturrock, another Seminole Heights Bicycle Club member and a member of the Hillsborough Bicycle-Ped Advisory Committee, sent me his photos, including some great environmental shots of the Bicycle Bash setting in downtown St. Petersburg.

One of Ken's nice shots. 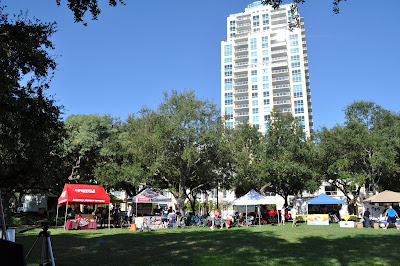 If you have Bicycle Bash by the Bay photographs you'd like to share, send them to me.
Posted by Alan at 1:15 PM 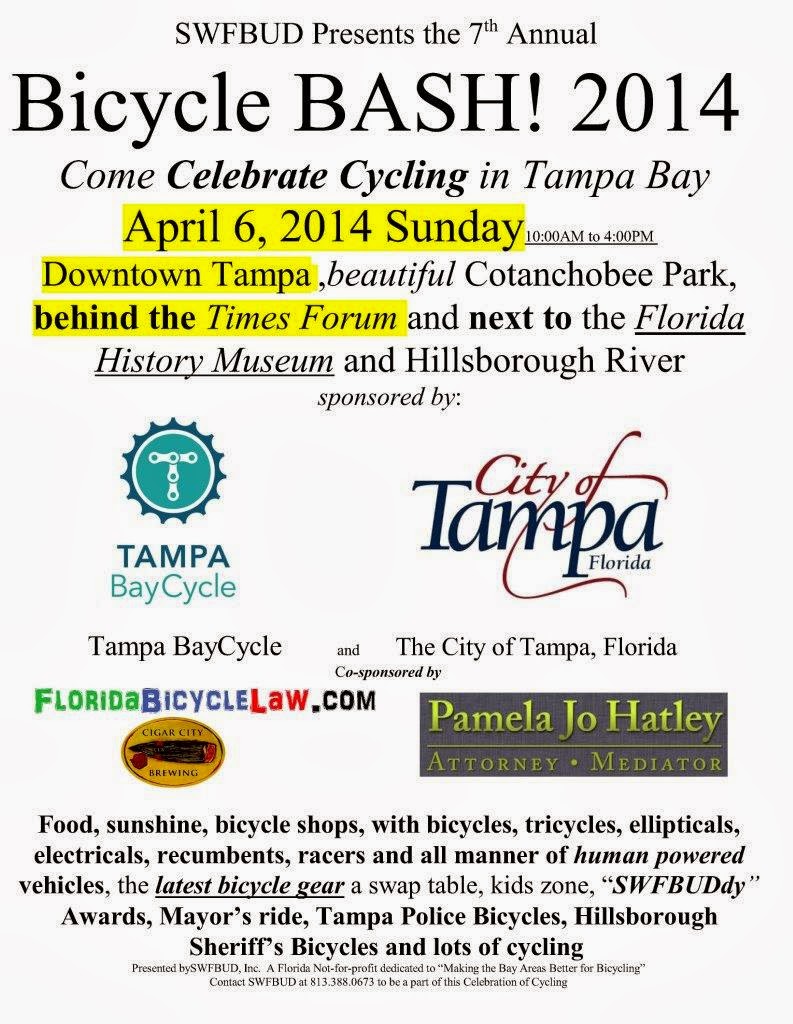 Attend the premier bike advocacy event in the southeast U.S. at Cotanchobee Park in downtown Tampa on Nov 4 from 10am-4pm 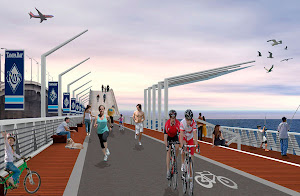 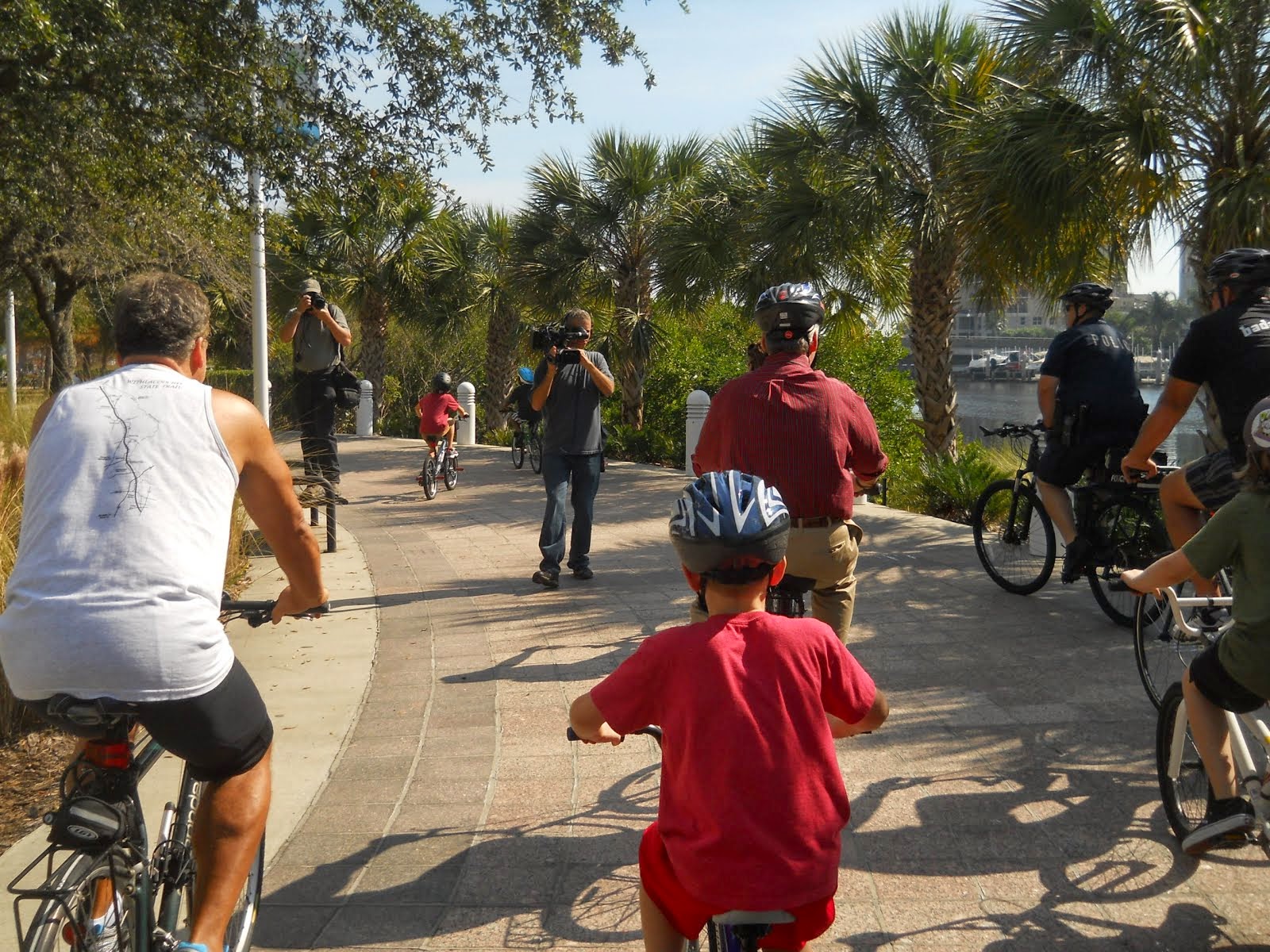 SWFBUD is lobbying Tampa and Hillsborough County to partner in building the BAM Network (Bicycle Area Mobility) by connecting the Tampa Bypass Canal Trail, the South Coast Greenway and the Selmon Greenway into one unified paved trail network. Click on photo for BAM story. 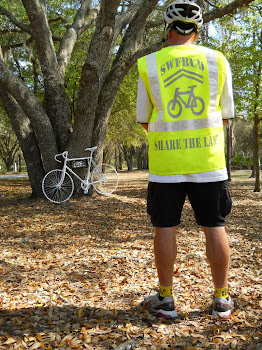 The League of American Bicyclists wrote a great letter in response to the Hillsborough County bicycle safety action plan explaining that aggressive, reckless and careless driving must be addressed in addition to bicyclist education. Click the photo and read the letter. 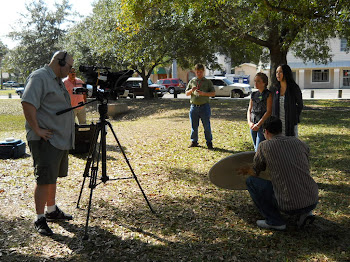 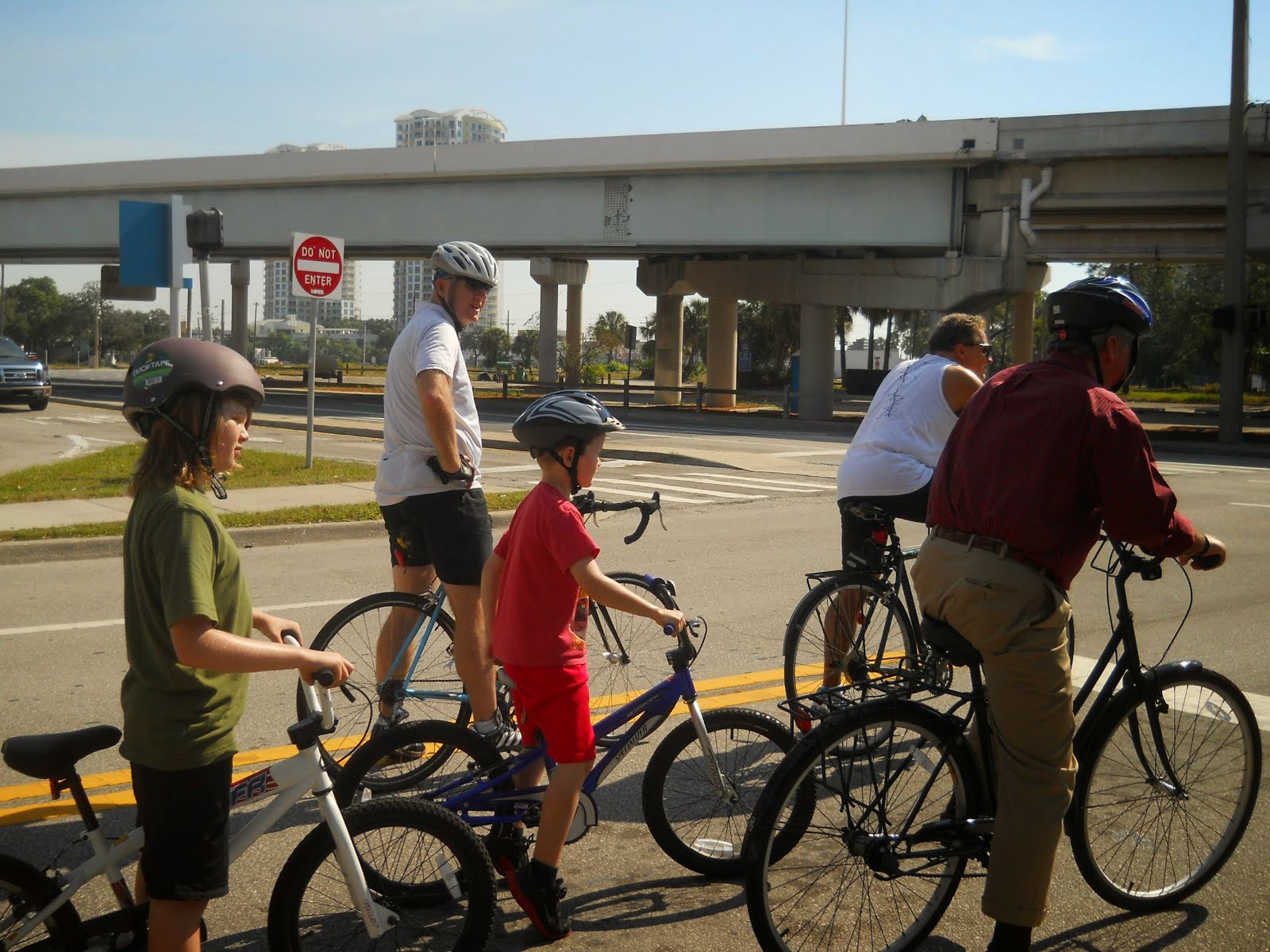 On Oct. 1, SWFBUD Director Alan Snel met Hillsborough County Mark Sharpe to ask that a bike plan be initiated after another bicyclist was killed in Tampa. Sharpe then prompted his county commissioners to initiate the plan. The next day, Snel worked to get the Tampa City Council to join the bike action plan. 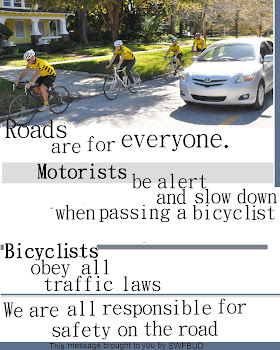 SWFBUD thanks Tanja for the design, Kirt for the photo and Joe for the 3feetplease yellow jerseys.

SWFBUD is an award-winning and nationally-recognized alliance of 10 Tampa Bay retail bicycle stores united to grow bicycling in this region. Click on SWFBUD logo to get to SWFBUD's new Facebook group page. 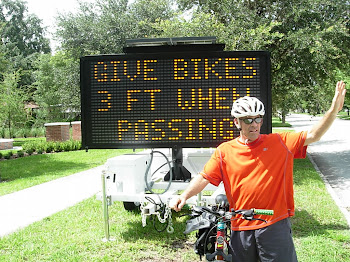 SWFBUD is partnering with local police to encourage law enforcement agencies to deploy portable electronic message signs to display bike safety messages such as "Allow 3 Feet When Passing Bikes" and "Share the Road with Bicycles." This sign was deployed by the Hillsborough County Sheriff's Office on Fletcher Avenue outside Tampa. 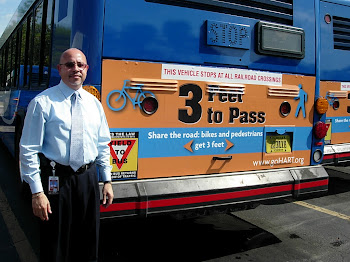 SWFBUD sprung to action after a HART public bus nearly struck a cyclist on a Tampa street by violating the law requiring all motorists to pass a cyclist by a minimum space of at least three feet. SWFBUD appeared before the HART board and requested HART launch a sign campaign to inform motorists to pass bicyclists by a minimum distance of three feet. In response, HART buses are now displaying this sign on the back.

WHAT IS SWFBUD and HOW DID IT START?

SWFBUD is a play on words of Swiftmud, the Tampa Bay water district agency.

SWFBUD traces its roots to the summer of 2006, when then-Carrollwood Bicycle Emporium owner David Luppino (who now owns Just Ride Bicycles) hired Snel for promotions, marketing and to help put on the Bicycle Bash festival. At the start of 2007, Luppino believed it was appropriate that other Tampa Bay bike stores get involved in promoting bicycling, so Snel recruited other store dealers to get involved.

SWFBUD won national retail bicycle advocacy awards in 2009 from the Bicycle Retailer and Industry News (BRAIN) and the Trek Bicycle Corporation. The Bicycle Bash won the Florida Event of the Year in 2007 from the Florida Bicycle Association.

SWFBUD's Snel attends many public meetings in Hillsborough and Pinellas counties, plus the National Bike Summit in Washington, D.C. to lobby political leaders and governing agencies to commit more resources to bicycling. SWFBUD believes communities that embrace and invest in bicycling become more successful and sustainable.

SWFBUD's 12 Members -- Click on store names for their Web sites 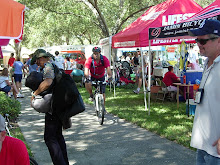 Last year. more than 3,000 bicyclists of all backgrounds descended on the fourth Bicycle Bash festival. Click on the photo for a fun video of the event from last October.

Flatwoods Park Ranger Thanks SWFBUD For Saving Park and Jobs 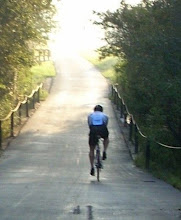 In 2009, SWFBUD lobbied Hillsborough County to keep Flatwoods and all of its parks open seven days a week after a proposed budget had called for axing two days from the parks' schedule. SWFBUD worked with Hillsborough County Commissioner Mark Sharpe to save the parks with a new financial program that includes new fees to keep the parks open and save rangers' jobs. Click on photo to see video of Ranger Rick of Flatwoods Park thanking SWFBUD. 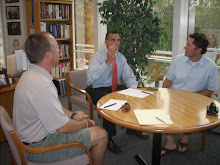 SWFBUD worked with Hillsborough County Commissioner Mark Sharpe to keep the county's parks open seven days a week after the county administraor proposed a budget that would close parks two days a week. "(SWFBUD) has lobbied for proper lanes and for appropriate enforcement of existing laws to improve community visibility for our fellow cyclists." -- Tampa cyclist Picot Floyd. 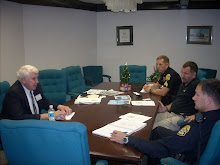 "Alan, I appreciate your willingness to work with us to improve officer awareness and promote bicycle safety among riders. It is our hope that the streets of Tampa will be friendlier to cyclists and ultimately safer for all." -- Tampa Police Chief Jane Castor

SWFBUD Reaching Out To Connect With Bicyclists 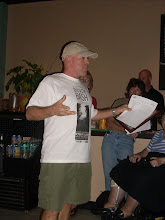 SWFBUD Director Alan Snel speaks about improving bicycle infrastructure to government boards and community groups. "Between the event, video, and all the articles where I see your name, you are transforming our community." -- Gena Torres, former Hillsborough Bicycle Pedestrian Coordinator

At 5 PM on a summer day, SWFBUD led a bike ride of more than 30 bicyclists to a local county budget hearing to tell county commissioners to not close parks two days a week. Mariella Smith, Hillsborough County environmentalist: "Thank you, Alan, for all you do to make our community safer - and more fun - for cyclists." 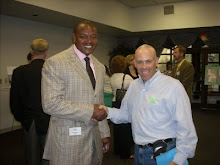 Every year thousands of bicyclists descend on the Bicycle Bash event, held annually by SWFBUD to celebrate bicycling in Tampa Bay and to energize people to get on bikes.

SWFBUD Speaking Out At Political Meetings

"Retailers have to become political if we’re going to survive. We need to have relationships with advocacy groups and planners.” said Alan Snel, director of the South West Florida Bicycle United Dealers, an alliance of bicycle stores in the Tampa Bay area. -- Bicycle Retailer and Industry News magazine.

The national magazine that covers the bicycle industry in this country honored SWFBUD with the 2009 Bicycle Retail Advocacy Award at the Bicycle Leadership Conference in Monterey, Calif. SWFBUD is deeply honored by this national recognition and I received the award from Megan Tompkins, editor of Bicycle Retailer and Industry News, and Tim Blumenthal, executive editor of Bikes Belong Coalition. Click photo for more info and check SP Times story, too: http://www.tampabay.com/news/humaninterest/article996595.ece 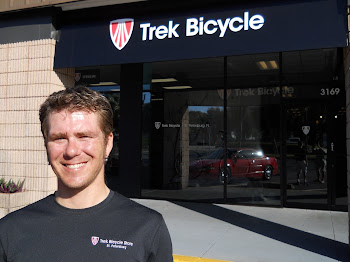 SWFBUD welcomes Rick Fidanzato, who owns ABC Bicycles on Central Avenue in St. Petersburg and a Trek Bicycle Store on 4th Street in St. Pete. Rick is an ardent bicycle advocate who understands that bicycling makes a community stronger and plans to conduct events that tie into St. Pete's local cultural and restaurant scenes. 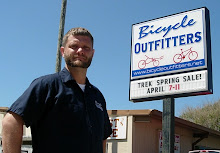 Owner Tom Jessup is a board member of the National Bicycle Dealers Association and his store was recognized as one of the Top 100 Bicycle Retailers by the trade publication, Bicycle Retailer and Industry News 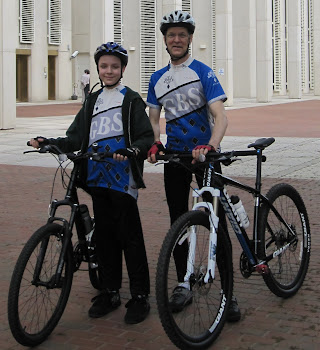 J. Steele is a passionate bicyclist and lawyers who cares deeply about bicyclists' rights in Tampa Bay and Florida. His brother also owns a bicycle store in Tallahassee.

The Mark Roman Law Group is in Clearwater and is SWFBUD's latest member. Law firm partners Mark Roman and Morgan Gaynor are bicyclists who support SWFBUD's mission of growing bicycling in the Tampa Bay area. 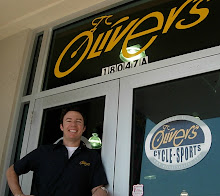 Owner Randy Myhre has biked everything from road and mountain to cyclocross. Randy supports bicycle causes in Hillsborough County. 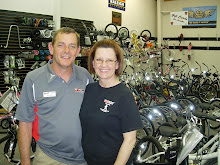 Owners Jana and Andy Clark are bicycle advocates who have attended Friendship TrailBridge meetings and are happy to join forces with other Tampa Bay bicycle stores to grow bicycling in the Tampa Bay market. 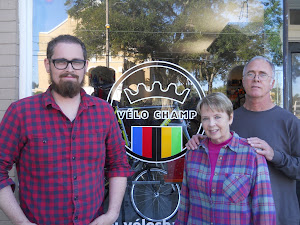 Tom Singletary is one of the biggest advicates for bicycling in the Tampa Bay region. Tom is an accomplished bicyclist and runner and legal expert on bicycle insurance and law issues. SWFBUD welcomes Tom as a member.

SWFBUD is happy to report that The Trek Bicycle Store in South Tampa on MacDill Ave. and in Clearwater on US 19 have joined the SWFBUD family. Kevin McDermott is the manager of the two stores and when you visit those stores, tell them you're happy to hear they've joined SWFBUD. The stores' owner, David Sanborn, is known in Central Florida for also owning Trek stores in the Orlando area. 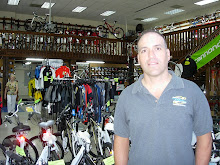 Manny Mirabal is the owner of University Bicycle Center, better known as UBC to bicylists in the Tampa area. UBC is a longtime, family-owned bike shop at 1220 E. Fletcher Avenue in Tampa north of the USF campus. Manny is also vice president of the Tampa bay Freewheelers.

Alan
Alan Snel is a journalist who took 6 1/2 years off from his daily newspaper career to create a bicycle store alliance in Tampa Bay to grow bicycling as a healthy lifestyle and as an effective mode of transportation. He returned to daily newspaper journalism in Las Vegas, working as a business writer covering the business of sports and stadiums for the Las Vegas review-Journal. You can find Alan biking the hills and mountains outside Las Vegas with a camera in his jersey pocket.